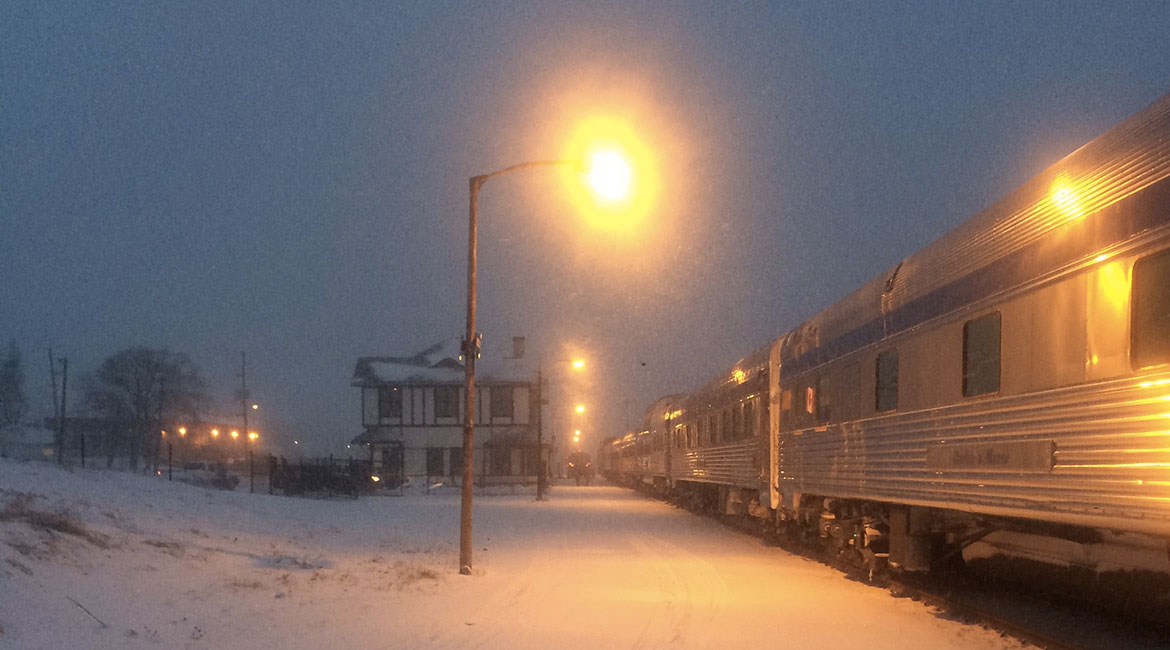 The Canadian—the Vancouver to Toronto train operated by VIA rail—pulls out of the station at 8:20 pm, on schedule.

The sound of a cork popping from a bottle can be heard throughout the Prince Albert Park Car as the passengers gather in the Panoramic Lounge for a bon voyage toast.

Eric sits in a shawl cardigan at the top of the Panoramic Lounge and introduces himself to a couple from Germany. He rides the Canadian often for work from Saskatoon. “Murals of parks used to hang back there,” he says, pointing the Park Car’s Mural Lounge behind a stairwell that leads up to the car’s, glass observation dome, “but they had to be removed in the 80s because the grease from people's heads rubbing against them was ruining them.”

A hint of diesel exhaust can be detected, and every so often the faint whistle of the engine at the front of the train can be heard.

Just past Boston Bar, the spotlight from an approaching freighter lights up the trees and thunders past at high speed

Natalie, a Via service attendant in the Park Car, is putting out muffins that just came out of the dining car’s oven. A family of mallard ducks bathe in a small pond by the side of the tracks, unphased by the repetitive thud of the Canadian moving from rail to rail behind them.

An elderly passenger named Paul, with white hair and pink skin covered in eczema, says he’s been traveling by train for two months. from New England to New Orleans, up to Washington, back down to Los Angeles, and back again. “This is pretty good,” he says, staring at his plate of seared scallops and prawns with asparagus, “on Amtrak, they can’t even make toast.”

Natalie the attendant climbs into the viewing dome in the Park Car to announce that the Canadian is running about an hour late but that there will still be a one hour stopover in Jasper. “Which is just about all the time you need for Jasper," she says.

Natalie returns to the viewing dome to point out Mount Robson. “It’s the tallest peak in the Canadian Rockies,“ she says, “unless you go south. The American end of the Rockies are way bigger. Actually, everything’s bigger down there, even the belt buckles”

A Via Rail crew member lifts himself in a cherry picker over the glass dome of the Prince Albert Park car and begins to wash the glass dome.

The lobby of the Athabaska is decorated with mounted heads of bison, elk and deer. . In the bar, a lone patron sits in front a coffee with a cane beside her, watching curling on TV and putting stamps on a stack of about fifty letters.

Roast duck and lamb are the most commonly ordered items on tonight’s dinner menu.

Conversation halts and cameras appear above the table to freeze the image of mountain goats dispersed half way up a hill directly beside the Canadian’s path, as they watch the sleeping roll past during dinner.

After her set, Dorika, one of two hired musicians aboard the Canadian lingers with the audience in the Panoramic Lounge. The other musician, a squat man with pudgy fingers, who goes by “Miami Beach,” says, “I once played a nightclub until 4 am, went and slept on the sand two hours, then played a breakfast show.”

Glasses rattle and toothbrushes fall from their resting spots as the Canadian hits the flat openness of the prairies.

The Canadian crosses a road somewhere in Saskatchewan. Until the path is clear, a flash of windows presents the sleeping class readying themselves for breakfast in front of a small lineup of cars.

A man in red pajamas and toque with Hudson Bay stripes on it, asks the service attendant, Daphne, if his attire is appropriate for breakfast in the dining car. “You’re good,” Daphne responds, as she swaddles a muffin in cling wrap.

Grain elevators appear. Standing stoically beside the track, they pan through the windows of the Canadian at speeds that are determined by their distance from the track.

A man with reading glasses folded into the pocket of his plaid oxford shirt approaches Daphne, who stands behind the bar of the Mural Lounge. "Well,” he says, “I put out an APB."

“Oh, who are you looking for?" Daphne asks.

“A cribbage player," the man says.

A herd of bison graze by the tracks

“Where are you from?” Dorika the musician asks a small woman with short, grey hair sitting across from her. “Cornwall,"says the woman. “I don't live in Cornwall, I exist there."

In front of the station, dogs squat to pee in the snow, then they are returned to their kennels in the baggage car.

At the beginning of her first set of the evening, Dorika the musician says “You’re always going somewhere on a train, and leaving something behind.”

A British family—two grandparents, husband, wife and twin daughters— take up the front booths of the dining car. A woman about the same age as the grandparents joins them. Upon hearing that the woman is from Yorkshire, the grandad leans over the table and says, “Are you still a proud lady?”

The lounge pianist plays Barry Manilow’s Look’s Like We Made It on a grand piano.

Dee, one of the passengers, prances and kicks at the snow. “Isn't this just the greatest!?" She cries out.

A large, blonde man in a Black Sabbath shirt introduces himself as Greg to Paul, the pink skinned man with the eczema. “I’ve never seen the country like this,” Greg says, looking out the window. “My kids all grew up and moved away. Divorced the wife. Dad died a few years ago, so we sold the house. Mom made a fortune in the real estate business in the 80s and retired at fifty. ‘Go. Live your life,’ I told her. Now I got a house in Ile-des-Chênes, just south of Winnipeg.”

A woman in her seventies with a diamond on the front of her tooth, wearing big black sunglasses eats a bison burger; a farmer from Sudbury sits across from her, silent.

In a clearing by the tracks, a man in a red flannel shirt, baseball cap and sunglasses stops chopping wood and looks up as the Canadian goes by.

Greg, who hasn’t left the Mural Lounge since noon, with a glass of neat rye in one hand, gives Dorika thirty dollars. She gives him a disc of her music. “I'll listen to it at home.” Greg says. “I saw you play yesterday, but had to leave, I was getting sad." .

A guy named Antonio, who boarded the train in Winnipeg, wearing high tops and a Caterpillar Equipment sweatshirt says, “The only way I’m going to be able to sleep in that birth is to get blackout drunk.”

Paul and Greg smoke on a stretch of gravel beside the Canadian. Greg is wearing a Banff, Alberta hoodie.

Greg yells out, “yaaaaaauuullllllpp!” He’s sitting with an Australian couple and their young son, who wears a conductor's hat. Greg gets up and stumbles toward the front of the car, leaving his dessert on the table.

A bald eagle standing on a frozen pond looks in the direction of the train as it rolls by.

Gary, the head service attendant, stands up and says, “Ladies and gentlemen, you’ll notice that the ten dollar Canadian bill features your train. Eventually, these will be collector items, and I just so happen to have some for sale. Two for twenty five bucks!”

A professor from the university of Wisconsin says “We are sounding like old farts here, but nobody knows how to do anything anymore. Most of my students don’t know how to have a conversation with someone they just met."

“The kids that do best in my class are the ones involved with sports,” says a school teacher from Fort McMurray, “it's the only thing left in the world where failure isn't rewarded.”

Antonio launches into a rendition of Woody Guthrie’s Way Over Yonder In The Minor Key, with Dorika’s guitar. Greg slouches across two chairs in the dark observation dome

“Paul? Rahl? Who cares. Fuck it. What do I care,” Greg slurs, “I’ll never see any of you people again anyway.”

A beer bottle rolls back and forth beneath Greg’s hulking body as he snores in the observation dome.

A woman wearing a grey, hooded, all weather jacket stands at the side of the road with a german shepherd in the morning winter fog, as the Canadian passes in front of her.

“I got on in Horneypayne,” a woman from Ajax says . “It’s out in the boonies and there’s no airport. So here I am!”

After traveling 4,436 kilometers over four days, the Canadian lumbers into Union Station seven minutes ahead of schedule.