personal projects/portrait of the artist in a video game 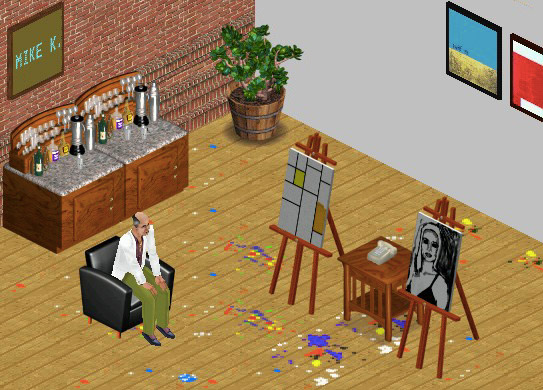 portrait of the artist in a video game

for my graduation from Emily Carr University of Art + Design, i created an art studio, with my own paintings hanging on the wall, inside the 1998 release of the Electronic Arts game, The Sims. i created a white male artist sim and forced him to paint the same pre-canned Modigliani and Mondrian influenced paintings that shipped with the game for about a year.

the only other activity i allowed the artist to partake in was drinking, from a model of a bar that also shipped with the game. over the course of the project, i used the mechanics of the game to force the artist to drink and paint, over and over again, day in and day out. During that time, i took screen shots of him in an effort to document a digital, algorithmic-based representation of the creative spirit. (the image pictured above is the only one that still survives from this project, its 500px wide dimension was hi-res in 2001 when it was created)

as the days wore on, the artist in the video game became more despondent with each painting, and each drink. there were several instances where he fell over at the bar as well, but i was relentless in my demands that the artist resume its drinking or painting. eventually, the artist sat in his chair, in front of his latest, forever repeating artworks that the game never allowed him to finish, and refused to move despite my prompts for it to continue .

any attempts to entice action with more drink or painting proved futile. the artist refused, and just sat there, staring out from his chair with his hands on his knees in front of his easels. it was at that point that i ended the project and presented screen shots of the performance to the faculty as my graduation piece for my degree in sculpture and new media.

my experience with art school was similar to the artist in the video game, after graduation i took an almost six year hiatus from making art. while i may have not spent that time sitting in a chair, or falling in front of a bar, the decades that have taken place since this image was captured have come to reflect the futility of art making. to some degree we are all the artist in the video game.