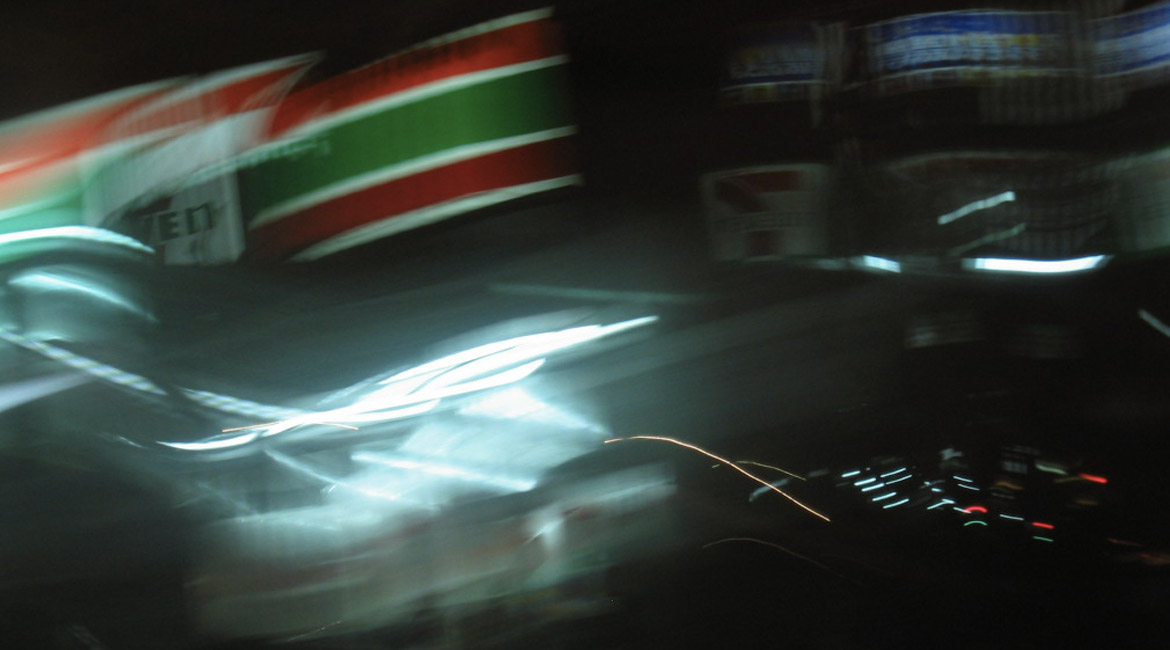 It was dark. We were young. 7-11 was the centre of our universe. We were there to get food because my friend Garth was having us over to hang out and watch Cops. In less than a year he would be dead.

After finishing his shift as a doorman at a bar, he crashed his car on an empty highway in the middle of the night trying to manage his steering wheel and Big Mac at the same time. That night at 7-11, he was still alive and waiting in his doomed vehicle while myself and Dave, who is currently serving four years in prison for using a screwdriver to hold up a pharmacy for its OxyContin supply, were in the location closest to Garth’s place.

This was what I call the golden years of 7-11. The Slurpee was at the height of its influence on my life, the staff uniform design borrowed from Futurism, and you could self-serve yourself these .99 cent, pre-cooked burgers sweating under heat lamps, awaiting your purchase. After choosing one, you took it to a fully stocked condiment bar that awaited your creativity.

I resuscitated many lifeless, beef meat “sev burgers” by turning their foil wrapper into a large flimsy plate, and filling it with an additional meal of lettuce, taco sauce, tomato slices, pickles, synthetic cheese sauce, mayonnaise, salsa, ketchup, some kind of chilli sludge that came from a hand pump, relish, onions, jalapeño peppers, banana hot peppers — basically everything and anything that was available — times three.

Then it was Dave’s turn at the condiment bar. I went to the till to pay. Just as I was about to exit the store, I turned back and called shotgun while he was blasting the burger in his hand with pumps of chili sauce sludge, so I stood outside Garth’s car and waited so he could get in the back seat first. My burger felt fat, hot and heavy in my hand as I watched four girls pull up in what I presumed to be one of their parent’s Oldsmobile.

Dave came out of the store holding a burger loaded filthy in one hand, and a Super Big Gulp in the other. He was wearing a blue, wool school boy’s jacket with white leather arms. On the left arm was a patch that said, “Dave.”

One of the girls, the driver, was half way out of their car when she stopped, looked at Dave walking toward me and said, "nice jacket, you fucking loser.”

I went into a state of involuntary motion and threw my hulking burger straight at the Oldsmobile while the rest of the young women continued to get out of it. It hit the windshield and exploded with a limp thud, then a wash of white, yellow, beige, green, but mostly a putrid, rusted ochre of watery chili, mixed with sad little granules of ground beef.

The mess created a vacuum in the moment like a comet that shows up in the sky, and for a second you forget about everything around you and that strange, streaking thing up there is all that matters. Dave stood there holding his sev burger and Super Big Gulp, watching me. The four young women looked at each other, then their car and then each other again. Garth stared straight into the white synthetic glow emanating from the floor to ceiling glass of the 7-11 like he knew what lay ahead for him. I looked at a singular stroke of white mayo across the windshield, painted from a palette of processed foods on a canvas laid into a suburbanite’s sedan.

A shrieking panic broke out.

The driver of the Oldsmobile looked at me and screamed, "thanks a lot, you asshole! Now I'm going to have to…. to… wash my car!"

She got back into the driver’s seat and fired up the engine. Her three friends barely had time to reclaim their positions before the Oldsmobile blasted backwards, then skidded to a halt. The windshield wipers came on and tried to lick the thick syrup of food from the windshield with its tongue-like blades.

Then the car went into drive, hard, and tore out of the parking lot. One of the girls looked back at me and smiled as the Oldsmobile took her further and further away from where I was standing, now empty handed.

Dave passed his burger up from the back seat on the way to Garth's. “Did you want some?” He said, through a mouthful of condiment.

published: September 24, 2020
byline used: david look
category: literature & poetry
appeared in: nothing for us
< back to all writing