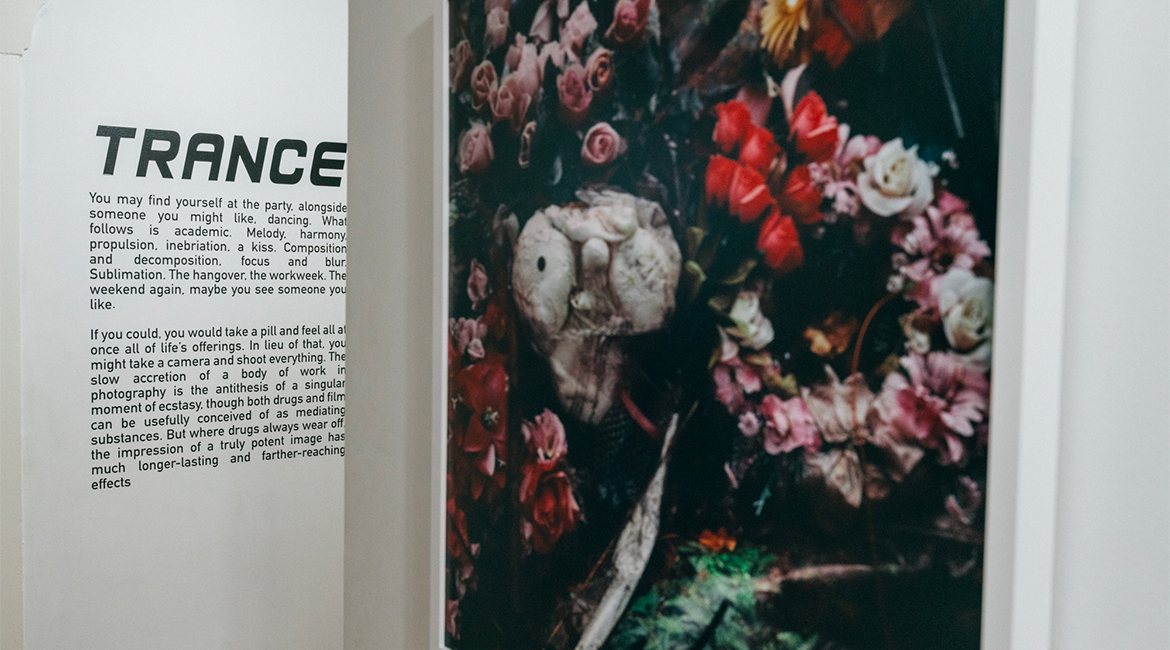 living in a trance

Photographers Zac Cruz and Annie Forrest lived in 11 gallery during the opening weekend of their new photographic experience, TRANCE. While Zac cooked dinner one night, they got to talking about the show and its themes with the gallery’s director, David Look. Then the smoke alarm went off.

David Look: TRANCE opened two nights ago here at 11 gallery, which is also an apartment. Since we’ve been living together as roommates for the past four days, I have to ask, have you realized anything about me that’s super annoying yet?

Annie Forrest:  No. You’re the best roommate. The fridge is always stocked with Champagne.

DL: OK, good. I just had to ask. The show runs for another six weeks, and you know how roommates start to hate each other….

AF: Well, you are in the bathroom, like, a lot. And, when I do get a chance to take a bath, you guys are always coming in to take a pee. So that’s kind of annoying.

ZC: And why only a bathtub?

DL: It’s weird, I know, sorry, I got rid of the shower. And the kitchen table too. The gallery is slowly transforming from something less domestic into something more exhibition oriented.

AF: There’s plenty of pissing in the kitchen too.

DL: (laughs) Zac’s Piss Boy (2019)? Yeah, well, there’s a definite closeness here. A comfort and connectivity of friends that feels pretty opposite to what’s happening right now. Is TRANCE nostalgia for the way things used to be? Or is it celebrating with a confidence that we’ll be able to get sweaty on a dance floor again soon?

ZC: I think it felt like it was nostalgic when we started, but I don’t know if it still feels that way.

AF: Now it feels like a celebration of those types of moments. Even having an opening, and bringing a few people together over the past couple days felt hopeful for a future where we could have more of these intimate, connected moments.

DL: Do you think to be a good photographer, you need to be somebody that’s able to be constantly around moments worth capturing? Or are you guys just really good at taking what’s around us all and making it look otherworldly?

AF: I’ve been fortunate to travel a lot and meet a ton of incredible people. As a photographer you need to invest time in your craft so that when the moments appear you are ready to capture them. It helps that I’ve had an amazing community that is open to being photographed. But at the core I see it as an open approach to life and people that allows for these scenes to unfold.

ZC: Obviously, when some of those photos were taken, I just always had a camera with me.

I wasn’t like setting up to take cool photos, but rather just to be there, you know?

DL: A lot of the photos are quite intimate, and capturing something kind of private. Did you ever feel weird pulling a camera out?

ZC: Not so much. I think the relationships I have are such long standing ones that it was okay, at least for me, to have a camera around. It’s not really like a sketchy thing. I’m definitely more shy of taking photos of people that I don’t know.

DL: Have ever been caught sneaking a photo of someone you didn’t know?

AF: For sure, but it has never been a problem. I wouldn’t do it in a way that I felt was taking advantage of someone. There’s a performative thing that happens when you’re out whether it’s in a club or at a party, or on the street. Having a camera gives me a bit of purpose to be out there.

DL: And so how did TRANCE come about then?

AF: I wanted to put together a group show in Vancouver for a while. Originally I wanted to curate something analog oriented that pulled together photographers from both here and other international cities, but with COVID the idea condensed. Zac was the first person that came to mind to collaborate with, when we brought our printed photos together, it made even more sense – the connection was clear.

ZC: It was pretty open when we started discussing it.

AF: It was more just a recognition of some similarities and a conversation about our imagery and what we were searching out.

ZC: Then we started to see some sort of thing that could be pulled into a narrative, and we called it TRANCE.

AF: There’s a sensual and humanistic side to it all. A constant searching for these moments of rapture and joy, and whether that’s through a connection with friends, on a dance floor, in a club, or something in nature that you’re out finding on your own.

DL: Do you feel like you have to carry a camera on all the time?

ZC: No. Well, there was a point when I did feel like I had to. But it was always like a camera was like a crutch or something, you know? For whatever I was going through, it was nice to sort of focus less on that, and more on taking photos of something that I’m drawn to.

DL: What kind of things were you going through?

ZC: I have a pretty steady traversing of anxiety and depression. And they kind of wax and wane.

DL: Yeah, same here. Which makes me wonder how the floral works in TRANCE fit with the more visceral photos of people doing things like, you know, walking into water fully clothed or exposing themselves in public

ZC: The flowers help to slow the tempo of the show down a bit. And in those down tempo moments there is bliss, introspection, death. It’s all swirling together, not dissimilar to a trip and absolutely true to life. I loved that Annie and I had taken flower photos that were complimentary but still coming from different points of view.

DL: But there is a lot of exposing of the body in TRANCE.

AF: Sure, but to me the nudity that is in my photographs is about friendship and trust. Especially in today’s society where nobody is behind a closed door, you know, when your friends feel comfortable enough, letting you photograph them, and trust that you’re gonna do the right thing with the image. And that if it is shown, it’s shown for a reason. It’s the ultimate in the kind of connections we’ve been talking about.

ZC: I think maybe for me it’s good to rail against puritan values when making art. Which is freedom.

AF: It’s also fun to be silly. There’s a photo, Smash (2019), of breasts pressed up against the glass of one of those children’s games you see in the mall. There’s these little toys, and then there’s these like grotesque, deformed looking boobs. It doesn’t have to be sexual.

DL: I didn’t think your guys’ photos would work so seamlessly with Kiichi Onodera’s ikebana arrangement in the beverage room (with hifi). His arrangement is designed to reach up to the heavens in order to attract somebody that’s deceased back down to earth. And I couldn’t help but think that the photos in TRANCE were alluring in their sensuality and trippiness.

AF: Having Kiichi’s flowers in the middle of the room really had an effect on the space, when you walk in you can smell them immediately. Which, I thought was quite nice, as opposed to walking into a club with some horrific smell like as you might expect from party photos.

DL: And then if you think about photography, it’s a captured moment in time that we’re forever moving away from. (pauses) I have to ask. Is there anyone in these photos that are no longer living?

AF: But the relationships have changed to some. And they’re more distant. They might not be dead, but they’re not around anymore.

DL: Speaking of which, I’m starving! Is dinner almost ready?

ZC: The potatoes need to bake for a minute still.

AF: You know what’s weird? A lot of people that came to see the show didn’t know that someone lived here. Walking in feels quite transformative.

ZC: You’re asked to not talk on the way up, the door opens, and there’s this huge TRANCE decal on the wall. It’s so jarringly different in here from the hall outside. There’s music playing, it’s bright, the flowers are fragrant, and the walls are covered in photos. It’s a nice sort of disorienting feeling. And then people have a second to settle in and experience it. It’s like the less you know prior, the better. About the art, about us, the whole space, everything. This interview probably isn’t going to help much with that (laughs).

DL: Do you think what TRANCE represents is only accessible to younger people?

AF: I think seeing, and being reminded of what youth is, and what freedom can look like can resonate with anyone at any time.

DL: So where were all these photos in TRANCE shot?

AF: Mine are all over from New York, to the Yukon, and Vancouver.

DL: Do you guys consider yourselves photographers?

DL: It’s just a weird medium, right? Like, it’s always struggled with legitimacy. But a lot of the photographs I found quite painterly. I thought about them less as a photograph, and more as abstract art, or both.

ZC: I wouldn’t say I think about my photographs as paintings. But I do think about painting. And I think about, you know, painting with light. It’s all about what that sensor does, and how you set a shutter speed and choose a focal length. I like motion lines, I like things that don’t need to be like a perfectly lit, perfectly composed photograph. Photographs can be beautiful without being a crisp shot.

DL: So if you’re not photographers (laughs) or painters, what’s next for you guys?

ZC: I think for now, just doing more shows. I like seeing my work in a bigger capacity, like a larger format for blowing up more photos and just looking at them. There’s so much about this that doesn’t have to do with me personally. Like I’m just a person, and I’m there, and I have a camera and everything else is just not really up to my control.

AF: I’m shooting for this concept magazine Garagisme in a couple of weeks. Also looking forward to a couple more shows this year including a solo show in Vancouver this summer, and group shows I’ll be a part of in Brooklyn and New York. Starting to conceive of another book too. I’d like to do something that incorporates collage, and experiment with design and painting. I love putting stuff on a wall, but I’m also into the craft that goes into making zines and books.

DL: Is it getting smoky in here or is it just me? I’m gonna open the window.

ZC: Is it getting smokey? (smoke alarm starts beeping)

DL: Is this really going to end with our dinner starting on fire?