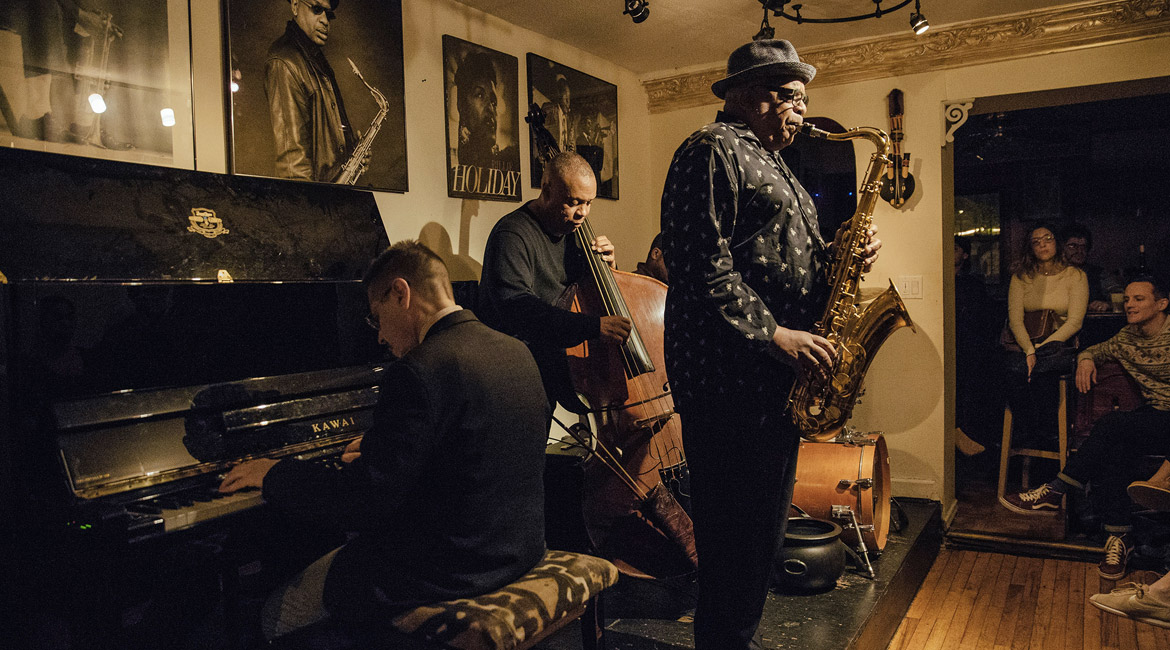 The email in response to the reservation I sent from bed that morning was explicit. Bill's is in the basement suite of a brownstone on 133rd Street in Harlem, #148. Doors will open at 9:45pm for the 10:00pm set. Be on time and bring $30.00 cash. No liquor would be served, but you can bring your own.

At precisely 9:45pm, I got into a queue with a group of about 30, all couples, all holding bags of contraband liquor. While jazz might embrace the singularity of the soloist, it makes for a very agreeable date.

Eventually I came to the front of the line where Jonathan, who penned my email earlier, was standing. I identified myself, handed over $30 cash and went inside.

Once the room settled, Bill came out from a small bedroom behind the front door and slowly made his way to the stage, shaking hands with everyone he came in contact with along the way, myself included. For some reason — nerves, or the bottle of scotch I had been pulling on since I got on the A train at 14th Street, I called Bill Jimmy. Hey Jimmy, I said, as he walked by. Bill didn’t seem to notice. He seemed tired.

After lumbering onto the stage, Bill took a quick moment to introduce himself and a small trio of young proteges that played piano, bass, and drums behind him. The silence ended when Bill launched into a torrential downpour of freeform, bee-bop jazz, tinged with notes that hung so very loosely on the tendrils of recognizable standards. The band careened in and out of history with the madness of their sound. Theo, the piano player, was a stand out, bouncing up and down and off his padded piano seat as everything sped along. The drummer watched Bill, so amused with what he was getting to be a part of, he was in a constant state of abstained laughter. The bass player looked like he was working on a math equation. Eyes darted around the stage from one solo to the next, trying to keep up with cues they needed to keep on beat, hitting the changes, shifting the angles of their shoulders to drive into it. Bang. Bang. Bang!

While this was all going on, an older man drew on a large sketchpad resting on the bar, dragging his graphite across the paper in gestural strokes to the sound of the band. Two younger women got out their cameras, crouched down low and started shooting photos of Bill standing at the very edge of the tiny stage, so that he was perfectly situated as the focal point of everything around him, horn protruding into the personal space of the audience seated at the front of the stage, blasting them with breathy notes full of spit.

It went on like that for almost two hours. Then it was over. Everything returned to calmness and Bill took the time to explain to the quiet empty room how he came about the place, why it was his dream to not only own, but play at his own place. Then he climbed down slowly from the stage, and went back into the bedroom, and shut the door.

published: November 5, 2020
byline used: david look
category: literary non-fiction
appeared in: nothing for us
< back to all writing